A2600
Doraemon - Kimi to Pet no Monogatari 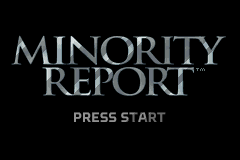 The main hero, John Anderton, the officer of service according to the prevention of crimes, has to manage to arrest the criminal before that commits a crime. On each of 10 levels there are a lot of enemies, including, not only people, but also robots. There are also innocent characters. John has to use various weapon if necessary: the gun, light grenades and other to carry out a task. The lattice of an aiming moves on the screen, and & nbsp; it is possible to choose any purpose. It is impossible to shoot down the ordinary citizen at all, then John will lose one of the lives. On the game course John can hide in various shelters and from there fire, being in relative safety. Winning against enemies, he receives useful objects, in particular, health and ammunition. At one of levels it can use the rantsevy engine. In numerous video scenes the useful information allowing to understand plot artful designs.