A7800
After Burner: Black Falcon 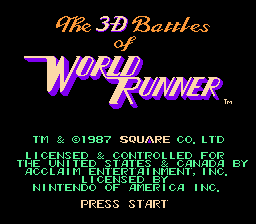 Game 3D Battles of World Runner, The rather unusual walker from a third party. Rear view of the soldier, constantly running ahead without stopping. He can knock his head on the poles, knocking out prizes can collect bonuses at the level, shoot and jump. In Japan, the game comes out twice. First time on floppy disks for the Famicom Disk System, the second time as the second part of the same game with modified graphics and a bit more rachnoy atmosphere already cartridges Famicom. In America, the game was released as a copy of the floppy version, but took an improvement from the Japanese version of the Cartridge. All three games themselves are almost identical.

This is a game in which you will become the wildest space cowboy who knows how to jump between worlds. The main character will visit 8 countries on the planet, and clear them from the evil zmeezverey headed by a terrible Grax. This is the simple story 3D Battles of World Runner, The - all of it is located on the box with the cartridge, so do not expect to see any screen or cutscenes during the game.

3D Battles of World Runner, The is a pseudo platformer. The camera is located behind a character who constantly runs forward. It can not stop, can only slow down or speed up or down button. For its time, the game was a very technically advanced: gave out a good picture, and worked extremely smoothly and without brakes. It is also one of the first, and the few games available anaglyph three-dimensional image mode, complete with cartridge were even cardboard 3D-glasses.

So what will make our brave cowboy? As I said, he rushes forward without stopping, flying through the vast abyss, dodging enemies and various traps, simultaneously firing from the most hard-nosed opponents. Sometimes come across powerups (extra life, a temporary invulnerability, the ability to shoot and so on), but you can pass a half-game without even knowing of their existence: because their method of production is very unusual and uncomfortable .... What will be necessary from all the fluff to ram the special poles and pick up falling out of their bonuses - it's if you're lucky, and if not, it will not pop up or anything poisonous mushroom that kills the unfortunate runner with just one touch. Needless to say that this action is very much breaking pace of the game. We should also mention the bosses - they are just pathetic. The only thing,

Do not expect to master 3D Battles of World Runner, The one night, since it is designed for the real hardcore. The complexity gradually and inexorably growing every level, throughout the game the developers throw up tough and interesting traps. The most important thing is that the game is healthy excitement and desire to pass it, because there gibnesh only because of their mistakes, not by the will of bugs, curve-control or cheaters enemies.

The music for this game 3D Battles of World Runner, The Nobuo Uematsu wrote the famous, for those who do not know - a man who wrote a masterpiece soundtracks for almost all games Final Fantasy series. The soundtrack is not bad, but when throughout the 8 levels you hear all 3 tunes, it becomes a little uncomfortable.