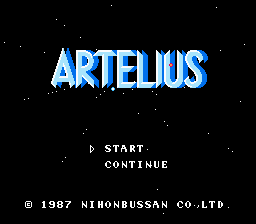 Game "Artelius" role, it is unusual the fact that, unlike other similar games, its action happens not among the woods and fields, and in an outer space. And you should move on a satchel with jet draft. Enemies in a game are seen so from them it is possible and to evade if you are not ready for fight. For the rest game "Artelius" it is similar to many other games of a similar genre.

at the beginning of the game "Artelius", you configure settings, then fly through space, red points are enemies, blue, on the contrary, allies. Each victory earns points which can be spent for improvements of characteristics