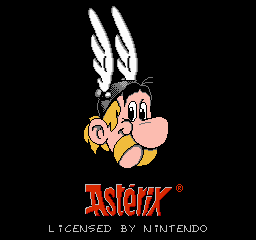 In the game "Asterix" quite famous filmstars of Asteriks and of Obeliks became heroes of a game again. However, this time Obeliks's will not be. One Asteriks is enough to collect asterisks, and to beat out prizes from boxes with a letter A, and also to beat out spirit from the Roman soldiers. In a game remarkable music.

Game "Asterix"-  a rasochny and entertaining platformer about adventures of the resourceful Gaul Asteriks . As we know from comics and animated films, militant Romans cannot take a small village of Gauls as those drink the special drink granting huge force. But to Caesar's soldiers not to occupy cunning. They managed to trap ingenuous of Obeliks , the friend Asteriks . Nothing remains to our hero how to save the friend. Everything that is necessary, so it to go and thresh hostile Romans. Each blow is followed by an inscription, as in comics. On the way it is necessary to collect asterisks which will bring you lives. Also at the levels bottles with that drink giving force are located. This very effective, though short-term, means of fight against enemies. If to try, it is possible to find an entrance to bonus stages. Graphically a game is very beautiful, as well as it befits a good platformer. The design of stages also did not pump up.