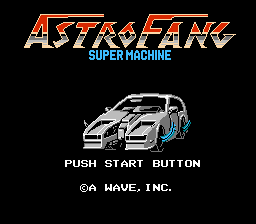 In the game "Astro Fang - Super Machine" beautiful futuristic races on cars. Backs with the soaring islands or something similar are very beautiful. There are also two modes of driving: by ordinary car and on its compact option. In the first case it is possible to shoot at the vehicles going by, but any collision is fraught with acrobatic somersaults. In the second case it is impossible to shoot, but it is possible to bortovat quietly oncoming cars without fear to turn over.

Scene of action of the game "Astro Fang - Super Machine" - the far future, ruins of once prospering planet of RS 121. From the developed civilization there were only deserts, heathlands and the Black Highway (Black Line) - the route extending through the remains once powerful