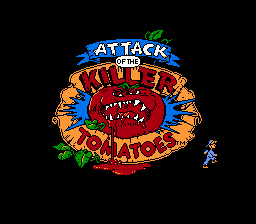 Attack of the Killer Tomatoes
Dendy - NES
"A game based on the cheerful parody to movies of horror films - ""The Attack of Pomidorov-Ubiyts"". The guy in a cap one on the night street for a start has to avoid attack of small, but spiteful tomatoes, running across from one lit site of the sidewalk to another. Tomatoes can just be pressed, but their crowd become it is dangerous. At the end of the first level it will be necessary to crush tomato more largely, and then to be engaged in destruction of the enraged vegetables in the sewerage."
GAME INFO
Game name:
Attack of the Killer Tomatoes
Family:
NINTENDO
Platform:
Dendy (NES)
Developer:
THQ/Imagineering Inc
Genre:
Platform game
Date:
1991
Number of players:
1
Untouchable