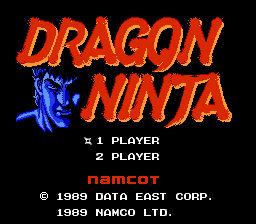 Bad Dudes Vs Dragon Ninja
Dendy - NES
Quite beautiful fight. Largely drawn pumped-over little man (one of two, for choice) in white trousers and an undershirt nearly one hands settles accounts with crowds of the ninjia and any punks. A game in the best style of the American fighters about brawny guys. Even the instructor at the beginning of the game giving a task looks as incredibly cool pilot of the helicopter or some else military. At the end of each level it is necessary to fill up incredibly big guy as the boss, and after passing the president will congratulate you and will thank for the rescue.
GAME INFO
Game name:
Bad Dudes Vs Dragon Ninja
Family:
NINTENDO
Platform:
Dendy (NES)
Developer:
Ocean/Data East
Genre:
Fights - one against all
Date:
1989
Number of players:
2
Umizuri Ni Ikou