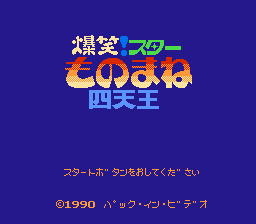 Bakushou! Star Monomane Shitennou
Dendy - NES
Something bearing a faint resemblance to desktop monopoly or other similar game, but in it is not present any cages. There is a crowd of the people which are impatiently shifting from one foot to the other and cube throws. After the first throw goes additional, and some sort of fight, expressed in pushing of the opponent in a breast. Itself should not allow to it to pass for a back. It is not possible to deal with a game in more detail because it on Japanese.
GAME INFO
Game name:
Bakushou! Star Monomane Shitennou
Family:
NINTENDO
Platform:
Dendy (NES)
Developer:
Pack-In Video
Genre:
Unique
Date:
14.09.1990
Number of players:
1
Tour De France