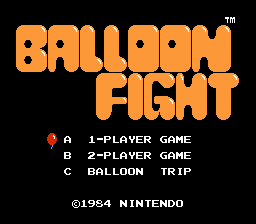 Balloon Fight
Dendy - NES
One of the very first games on a prefix, simple, but at the same time ingenious. The idea is simple: one little man on two balls against crowd of one-ball. All fly, Masha wings and submitting to the laws of gravitation and inertia. Everyone has a certain similarity of a beak which it can burst the opponent's balls, as is a main objective. In a game there are two modes: it is possible to be improved in battles with opponents, and it is possible in ability to operate flight at the long level with obstacles.
GAME INFO
Game name:
Balloon Fight
Family:
NINTENDO
Platform:
Dendy (NES)
Developer:
Nintendo
Genre:
Platform game
Date:
1984
Number of players:
2
Taito Basketball