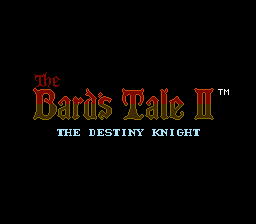 Bard's Tale II, The - The Destiny Knight
Dendy - NES
Second part of the game Bard's Tale. Same role system. Differs from the first in the improved graphics and the much bigger number of various characters who can be met during the game. The type of labyrinths improved, but the card with the current location of the character near the travel screen was gone. For the rest - a set of team, a travel, a talk and fights - all as well as in the first part and in other similar games.
GAME INFO
Game name:
Bard's Tale II, The - The Destiny Knight
Family:
NINTENDO
Platform:
Dendy (NES)
Developer:
Pony Canyon
Genre:
Role-playing game
Date:
1992
Number of players:
1
Number Jumble