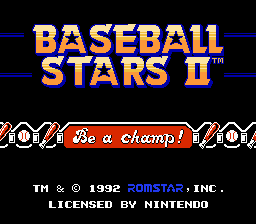 Baseball Stars II
Dendy - NES
Second part of very successful simulator of baseball. Players remained still quite large and in detail traced. A few look in the field changed. Now, the throw of a ball is shown in the screen as if imposed on the general plan of the field. Then it disappears and action in the field begins. The good course, instead of sharp change of the modes. In a game it is possible to form teams and to hold tournaments, and there is an opportunity to play a match automatically, the computer itself will count who won and who lost.
GAME INFO
Game name:
Baseball Stars II
Family:
NINTENDO
Platform:
Dendy (NES)
Developer:
Romstar
Genre:
Sports game
Date:
1992
Number of players:
2
Pocket Tennis Color