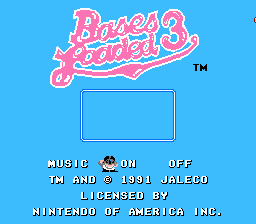 Bases Loaded 3
Dendy - NES
Third part of baseball series. A game became even more nice. There was a choice of stadium. The view of the game field underwent changes again. This time we see the field after a throw from the opposite side of a rhombus. From outside, where balls are returned. And players became slightly more largely and more in details. The company view from the party of the ball giving at a hurling back remained also in this part, having undergone some improvements in the plan of animation.
GAME INFO
Game name:
Bases Loaded 3
Family:
NINTENDO
Platform:
Dendy (NES)
Developer:
Jaleco
Genre:
Sports game
Date:
1990
Number of players:
2
Extreme Sports with The Berenstain Bears