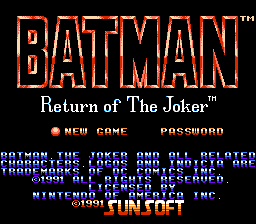 The most improbable Batman on NES. Game of level of a prefix of bigger quantity of bits. And business even not in excellent music from Sunsoft, and in incredibly drawn levels, with animated by clouds and other prettiness, a large number of different weapon, and also, in in details traced numerous enemies and the Flying person was not offended.

To the city of Gotham is threatened by danger the Artful Joker bears plans to poison with poisonous gas of its inhabitants. But there was a savior of citizens. Batman is the Person - the Bat. The batman pursues the Joker who is constantly escaping him. If you pass all stages of this fascinating game, then the deadly fight of two characters is inevitable at the end.