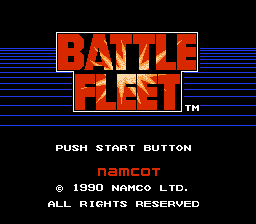 Battle Fleet
Dendy - NES
Terribly interesting, but not absolutely clear strategy in Japanese. Similar to the fact that usual sea battle moved to incredibly higher level. In the field in a section it is possible not only to have the ships, but also their production plants now, and also other equipment including overland which is useful for a gain of islands. Incredibly detailed game with a large number of the different drawn scenes and animation.
GAME INFO
Game name:
Battle Fleet
Family:
NINTENDO
Platform:
Dendy (NES)
Developer:
Namco
Genre:
Strategy
Date:
1990
Number of players:
1
Chester Cheetah