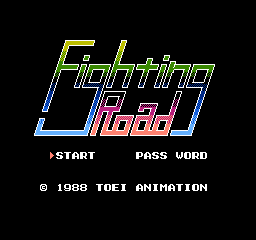 Battle Road
Dendy - NES
Unusual fight. Before fight show your location on the road of fights on the map. In each point you are waited by one fighter with the style of fight. Having won against it, you not only acquire the right for transition to the following, but also a quantity of points to increase force or to receive new blows. The most difficult that the damages put to you are restored in a next round only partially. So it is necessary to be careful and not to give itself to beat very often.
GAME INFO
Game name:
Battle Road
Family:
NINTENDO
Platform:
Dendy (NES)
Developer:
TOEI Animation
Genre:
Fights - in private
Date:
1988
Number of players:
1
Neon Genesis Evangelion Shito Ikusei