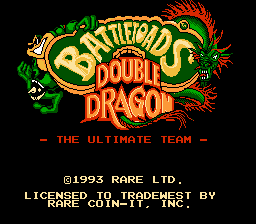 Battletoads & Double Dragon - The Ultimate Team
Dendy - NES
The second part of a game about frogs. This time they united with the Double Dragon - two pumped-over guys from other game. And the sense remained the same - beat and go further. This series very strongly differs from the first as on quality of graphics and a pressure of music, and on a variety of a game and higher workmanship. In this part it is possible not only to go on levels, but to go by similarity of the motorcycle, to go down on a rope and even to fly in space.
GAME INFO
Game name:
Battletoads & Double Dragon - The Ultimate Team
Family:
NINTENDO
Platform:
Dendy (NES)
Developer:
Tradewest/Rare Ltd.
Genre:
Fights - one against all
Date:
1993
Number of players:
2
Final Fantasy