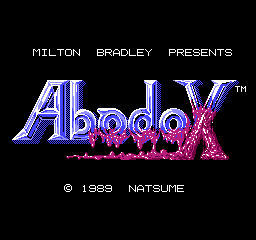 The 5012th year, to the planet Abadoks ( of Abadox ) the unknown and extremely hostile life form devouring all live on the way moves. This is Parazitis (Parasitis) - the huge monster which appeared from the most distant and dark corners of the Universe. Defenders of the planet rush to fight, desperately trying to prevent the awful end, but everything is vain - military forces are completely destroyed, the planet is swallowed, and the ruthless monster continues the travel on a fateful galaxy. But it is not still lost and there is a ghost of a chance on rescue, the last defender of Abadoks - the second lieutenant Nazal who decides on rescue of the princess Maria who during the attack was by the ship hospital which is gobbled up by Parazitis survived. So, our lonely hero, having put on