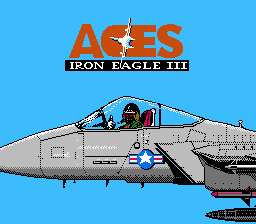 Game "Aces - Iron Eagle 3" - the aviasimulator. At first there is a prompt with the pilot flying in a cabin, then the choice of a mission and instructing. It is possible to choose from three types of the planes starting with the aircraft carrier further and, eventually, to visit weapon aboard the plane. At last take-off from the aircraft carrier. A game in itself concedes to & quot a little; TopGun" on quality of the flight mode, but in general it is more detailed and fancy. Special attention should be paid to sound effects: noise of the engine of the plane sounds as real. Music in a game also at the level.

Before us the fighter simulator on the NES console. More precisely – the pseudo-simulator, possibilities of the NES console are quite limited. But, despite these restrictions, before us the tremendous video game in quite rare genre for a prefix from Nintendo.

Here all main attributes of the simulator & ndash are; a view from a cabin when flying, a briefing of missions and control of the plane before a departure. It was not also without an arcadian part if the first part of a mission we fly over the sea or the land with a view from a cabin, then the second part of a mission – destruction of the purpose of a mission, it is executed in & quot style; Urban Strike", in an isometric look. Graphics is quite good, places – tremendous. For example, at start of a game we are met by quite detailed fighter in the movement. Looks impressively. The menu at which background the aircraft carrier floats is very beautiful too.

Briefing of missions – represents well made prompt for NES - the animated drawings with the text from below. And further we prepare for a departure, we choose the fighter and we can arm it at discretion, fortunately, big knowledge of rockets are not required and it is possible to entrust this option – to the computer. Without hesitation, it is possible to choose automatic configuration. At choice three steel birds & ndash are offered to us; F14 Tomcat, F18 Hornet and Harrier. Cockpits of planes look different.

with a view from a cabin. From the point of view of gameability to carry out bends, to be directed at the purpose, to launch in the opponent missiles – occupation is fascinating. Your first impression will be in good spirits - & ldquo; Real view from a cabin! With settings and the radar! & rdquo;. Of course, to the real live fighter also ndash is far; permission of a prefix would not allow to transfer to screens of gamers a huge number of buttons, indicators from the real fighting vehicle. But the radar works, there is a similarity of the autopilot – as soon as we brought down all enemy fighters – the autopilot which will accompany us to the mission purpose turns on. Still some indicators work, so, turning to the left and to the right, rising above or going down to the earth, you will notice that indicators on a cockpit react to all your actions.

One more indicator in a cabin – a condition of the plane in the form of the drawing. Looks not bad and quite seriously. On the same indicator the message on the missiles launched in us arrives. And of course, mode of battle – we can choose from several rockets, plus process of targeting and start of the rocket, - the most important functions when flying from a cockpit. Specification of a cockpit for NES quite good, enemy planes and the launched missiles – are also perfectly traced. And here land, water smooth surface and heaven – are very conditional. But in dynamics you do not pay attention to it. In a word, flights are executed well, you quite feel as the pilot of the modern fighter. In the video game it was not also without arcadian elements – having so brought down, the opponent the bonus can drop out of him. For example, red letter B – having flown on which, we will receive an additional bomb. And it at would seem moderately detailed cockpit and a hint on flight simulation!

As soon as we will destroy all opponents pursuing us – the autopilot will turn on and will accompany us to the task purpose. We will observe the message, that the autopilot is switched on and we will notice as in an expedited manner we fly, plus the radar will turn into the card according to which we will also notice as quickly we fly to the purpose. The autopilot mode lasts several seconds. And long it is not necessary to wait. Then the second part of a mission & ndash begins; executed in an isometric look in Urban Strike style. Here specification quite good though the color palette is monotonous. There is a lot of objects, many of them – are destroyed! For example, storming overland base, we can blow up many structures on it! And at the same time and defenders of base – tanks, stationary guns and air reinforcement. This mode brings a variety and is pretty interesting. The overland landscape can consist of a huge number of small trees of green color and the base consisting of many elements, color of asphalt. And the earth – colors of clay. We do a raid on base and we pick it to pieces. Then the mission is considered executed! Our plane soars up up and is carried away away!

Management is executed by

conveniently, and to play from the touch joystick on the aneroid device – pleasantly also does not cause difficulties. Especially there are no problems with management and on the real console or the emulator. Eventually, you can use a pause (start key) and take breath. Key & ldquo;