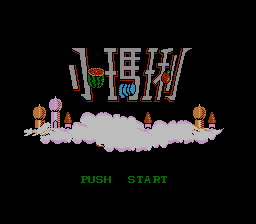 Bingo
Dendy - NES
Unpretentious casino. There is a square from game fields on which the ball runs. The prize or loss depends on where it will stop. The prize can try to be doubled several times with risk to lose acquired. For each gained one thousand monetary units in cash desk the curtain opens, and there - a terrible state the woman (more softly and you will not tell) in an impressive pose. Only for the fourth thousand it appears without skirt (but in very long shorts), and only for the eighth thousand remains in one bikini. In a game there is an end if to gather 9999 money. It is almost impossible to make it since a game not really honest: as soon as successful attempts to double a prize make it more than 100, the following attempt will always be losing (contrary to the promised logic of probability 50/50). Nevertheless, in the roulette even the largest rate sometimes drops out (9
GAME INFO
Game name:
Bingo
Family:
NINTENDO
Platform:
Dendy (NES)
Developer:
Nei-Hu Electronics
Genre:
Gamblings
Date:
1991
Number of players:
1
Brutal Sports Football