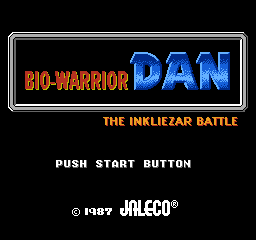 Bio Senshi Dan - Increaser Tono Tatakai
Dendy - NES
Browser with a side view. We play for the guy in a green suit which returned from the future 2080 to the past (1999) to save the planet from monsters. For fight against them at first only a sword, but then we find various firearms. At the end of levels the boss waits. At the levels doors to rooms in which it is possible to talk to various beings and people meet, to receive new weapon or to play in pass a game. A game came out only in Japan. The American option existed in two versions - full translation of the Japanese option and the version which is completely changed under America. Nevertheless, any of them was not issued officially.
GAME INFO
Game name:
Bio Senshi Dan - Increaser Tono Tatakai
Family:
NINTENDO
Platform:
Dendy (NES)
Developer:
Jaleco
Genre:
Platform game
Date:
1989
Lunar: Silver Star Harmony