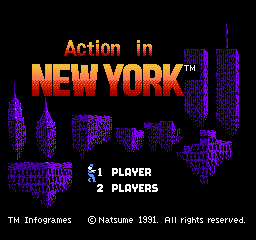 Game "Action In New York" - a flat letalka, a side view. Future. The alien landing lands on the earth and begins to sow destruction. Two fighters equipped with powerful weapon capable to move not only on the ground, begin systematic cleaning of the area from alien creatures. Each fighter has additional pair of guns which rotate around it in an arsenal and can send death to enemies not only on a horizontal trajectory. One of the best musical tracks of a prefix. Graphics and bosses are magnificent!