CPS3
Go For the Gold 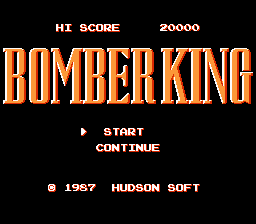 Bomber King
Dendy - NES
Continuation of a subject of Bombermen in adventure option of a game. A look still from above, but the field is not limited to one-two screens any more. There is a lot of levels also they big, as in any platform browser respecting itself. Bombermen any more not that quick fatty, and already quite correct proportions little man. Weapon, except bombs, at it became much - it can just shoot enemies from the blaster. Enemies became more various and more terrible too. A game begins with disembarkation of the hero on some planet.
GAME INFO
Game name:
Bomber King
Family:
NINTENDO
Platform:
Dendy (NES)
Genre:
Platform game
Date:
1987
Neo Cherry Master