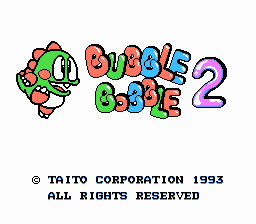 Bubble Bobble 2
Dendy - NES
The second part of a series of games about the drakonchik which is spat bubbles. A bubble with the enemy who got inside it is possible to burst and win a prize. After extermination of all enemies the drakonchik moves to level below. In the second part of the schedule became much more colourful and more various, also music improved. The sense remained invariable.
GAME INFO
Game name:
Bubble Bobble 2
Family:
NINTENDO
Platform:
Dendy (NES)
Developer:
Taito
Genre:
Platform game
Date:
1993
Buru To Marty Kikiippatsu