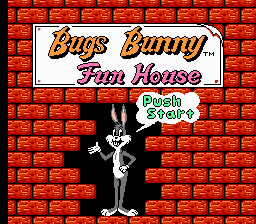 Bugs Bunny Fun House
Dendy - NES
Simple browser with a rabbit Bagz Banni in a leading role. There is level with several doors and ladders. Having come into one door, you leave another. At the level it is necessary to gather all carrots, and mean animals will disturb you. On them there is a justice in the form of boxing gloves and safes too. It is possible to hit in the face or to throw off on the head - all in the best traditions of the animated film about a rabbit. It was originally planned to call the game Bugs Bunny Fun House under which it appeared in the form of demoversions or prototypes.
GAME INFO
Game name:
Bugs Bunny Fun House
Family:
NINTENDO
Platform:
Dendy (NES)
Developer:
Kemco
Genre:
Platform game
Date:
1989
Big Bird's Egg Catch