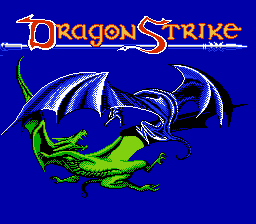 Game "Advanced Dungeons & amp; Dragons - Dragon Strike" - the top view. Angry people do not allow a dragon to do some flying quietly above the ground - shoot from all tools. Angry dragons do not allow our dragon to do some flying highly in air. So we will purify both air and the earth of what disturbs us. What relation a game has to of AD& I did not understand D . Most likely, dragons.

"Advanced Dungeons & amp; Dragons - Dragon Strike" - an unusual action on canons of AD& D . You want to feel in a skin of a dragon? At choice gold, silver and bronze dragons, at everyone weak and strengths. It is necessary to execute several missions worldwide, connected, generally with extermination of other dragons.

in Krinn, the world of the saga Dragonlance, during War of Mines.

"Advanced Dungeons & amp; Dragons - Dragon Strike" combines elements of role-playing game of video and the simulator of flight. The main character is the knight who flies on a back of the metal dragon equipped with a spear and various magic objects. It is also possible to use also fiery breath of a dragon, and also can attack claws if the dragon flies up close to enemies. In a game for