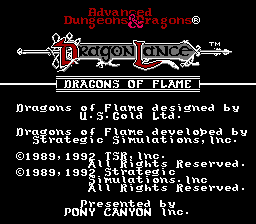 Game "Advanced Dungeons & amp; Dragons - Dragons of Flame" based on works of the Dragon Lance series of Tracey Hikmen and Margaret Ueys. For those who did not read this, maybe not the best, but, undoubtedly, the cult work to play this game maybe it is uninteresting. The top view as in usual rolevka, enemies it is visible on the card, and, having met one of them, we get to the mode of battle with a side view as in a usual platform toy.

Classical AD& D on of Dendy . Eight heroes come back to the native village and see it destroyed. It is necessary to revenge offenders. We go according to the card, we run on the enemy and we battle against him in real time. The good role-playing game, by the way, which did not come out outside Japan.

"Advanced Dungeons & amp; Dragons - Dragons of Flame" - it is role-playing game in which it is necessary to operate team of eight heroes. All team as on selection, in the best traditions of a genre: there are both a magician, and the soldier, and the shooter. At everyone the specialty, everyone is good in the business, in a game it is possible to switch at any time between the chosen heroes. WSC
All Grown Up - Express Yourself