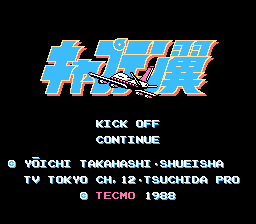 Captain Tsubasa
Dendy - NES
Football simulator, but absolutely non-standard. On the screen quite detailed animation rollers of jog of the player as it gives a pass as it is accepted by other player are lost. Your task, according to the set tactics, to choose necessary further actions of the player from the menu. At appearance of defenders of the rival, for example, it is possible to try to lead round them, or to give a pass to the team mate. The result will be visible at once. All action is continuously commented by the leader.
GAME INFO
Game name:
Captain Tsubasa
Family:
NINTENDO
Platform:
Dendy (NES)
Developer:
Tecmo
Genre:
Sports game
Date:
1988
Baseball Stars