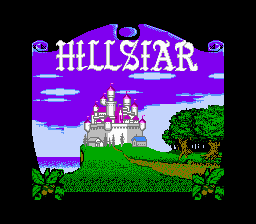 "Advanced Dungeons & amp; Dragons - Hillsfar" - adventure role-playing game. After generation of the character according to the shortened scheme taken from of AD& D , we get to a certain world where it is possible to move on a horse from the lock to the lock, to speak with computer characters. To carry out quests and other. Naturally, owing to limitation of opportunities of a prefix, a variety of game situations is small. Though music also does not shine, graphics in a game very beautiful.

Beautiful toy not similar to last versions of ADID. We choose to ourselves the character, we choose his race, a floor, its profession. After us it is necessary to gallop on a horse to the settlement, where and to proceed our adventures. The real treasure for fans of tangled role-playing games.

"Advanced Dungeons & amp; Dragons - Hillsfar" - it is, perhaps, the best of the games for of NES created in the above-stated Universe. More simply to imagine, about what this game, one may say, that it is mix of text RPG and ekshen-RPG. At first it is necessary to generate the character: to choose race, an occupation, a floor and outlook. A then - to go to a long, but fascinating adventure. The world for a research and adventures is simply huge, there is a set of opportunities for passing of the same tasks, there is a freedom of choice of actions - what else is necessary for the burned roleplayer?

that realization of a game leaves much to be desired, to a dress