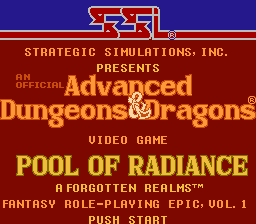 Game "Advanced Dungeons & amp; Dragons - Pool of Radiance" on role system AD& D , typical representative of this class of games. Pseudo view from eyes. Labyrinths, confidential rooms and switches, talk with players and quests. Your party consists of several people who can be chosen from available or to generate the. Graphics at the level, music does not disturb.

"Pool of Radiance" - quite standard role-playing game, but is one nuance which distinguishes it from many games of that time - pseudo tridimentionality (overlooking action from eyes of the character). Graphically a game looks very great, after all for those times a view from eyes of the main character was in wonder. And the unique spirit of a game is supported by a set of role elements and nonlinearity of game process.

that "Advanced Dungeons & amp; Dragons: Pool of Radiance" - the only game in a series which received very positive reviews of critics as in the 1990s, and lately. It needs to be started first of all if you want to spend time behind very qualitative RPG for of NES .

Action of a game for