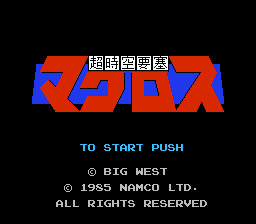 Choujikuu Yousai - Macross
Dendy - NES
Game based on the anime of the same name. Letalka a shooter game with horizontal movement. It is necessary to operate the transforming robot which can take three forms - the plane, the semi-plane with legs and the robot. In three different modes the flight speed, style of fire and maneuverability change. The robot moves on the screen most quicker and movement speed on level minimum can fire in the opposite direction, but at the same time; the plane the least maneuverable of all, fires only forward, but it has the maximum speed of flight; the semi-plane is golden mean, average speed, average maneuverability, but it cannot conduct the return fire. In each level it is necessary to reach the opponent's ship, and then for limited time to destroy its center.
GAME INFO
Game name:
Choujikuu Yousai - Macross
Family:
NINTENDO
Platform:
Dendy (NES)
Developer:
Namco
Genre:
Shooter game
Date:
1985
Hanafuta