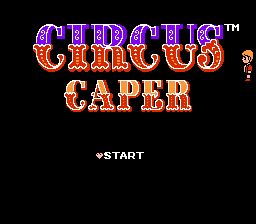 Circus Caper
Dendy - NES
At the guy angry circus actors kidnapped the sister, deception having enticed her into circus and having divided with the brother. Now he has to save it. The guy in red runs on the arena and cleans colored physiognomies to clowns. Various objects which need to be collected fall out of them. It is in passing possible to come into certain rooms and there to play various games on points, for example: jumps through fire with a bear.
GAME INFO
Game name:
Circus Caper
Family:
NINTENDO
Platform:
Dendy (NES)
Developer:
Toho
Genre:
Platform game
Date:
1989
From TV Animation - One Piece - Treasure Wars