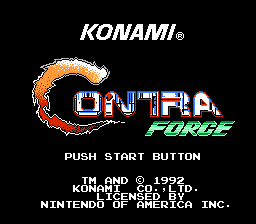 Contra Force
Dendy - NES
The fighter from Konami. Carries on traditions of Contra, but now itself can choose the hero from team of four people. Receiving a new type of weapon is similar to Gradius games when it is necessary to collect identical prize-winning objects which collect on a weapon scale. At any time it is possible to receive the weapon corresponding to the saved-up value. In our case, it is necessary to collect small suitcases. Each of fighters possesses a unique set of weapon. One, for example, has a flame thrower and the grenade launcher, at the second a rifle and self-guided missiles. In the mode of a pause the menu where it is possible not only to replace the hero with another opens, but also to enter into a game of the computer workmate who according to the program will give this or that help. Unfortunately, it will support only 5 seconds, but it quite usually is enough.
GAME INFO
Game name:
Contra Force
Family:
NINTENDO
Platform:
Dendy (NES)
Developer:
Konami
Genre:
Platform game
Date:
1992
Gambler Jikichushinpa