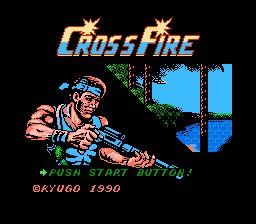 Cross Fire
Dendy - NES
Fighter. Again Rimbaud has nobody land from the helicopter to the back to the enemy: to guerrillas or still to whom. Enemies are very well armed, but what they can against one person? Except, actually, fists the hero has grenades, but he them can throw only on the second plan where there are tanks, guns and enemy granatchik run. Here the hero also runs, throws grenades in bushes, and settles accounts with the closest enemies fists. After it will find both a rifle and the gun for now... All other game is sustained in similar spirit.
GAME INFO
Game name:
Cross Fire
Family:
NINTENDO
Platform:
Dendy (NES)
Developer:
Ryugo
Genre:
Platform game
Date:
1990
Happy Pairs SV
Heroes of The Lance