NG
Need for Speed - Most Wanted 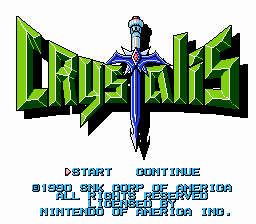 Crystalis
Dendy - NES
Hundred years passed since the big war which wiped out mankind. People recovered a little, but were rejected far back. At this time the young man from the past all lilac color wakes up from a dream. Here role-playing game begins. Standard top view. There is no separate fighting system, the hero waves a sword and on the place settles accounts with creatures. Generally, Zelda game. Not and there is a lot of player's parameters, the main thing - that is put on also what weapon you in a hand, well and money, of course.
GAME INFO
Game name:
Crystalis
Family:
NINTENDO
Platform:
Dendy (NES)
Developer:
SNK
Genre:
Role-playing game
Date:
1989
Kakuto Ryori Densetsu Bistro Recipe - Wonder Battle Hen