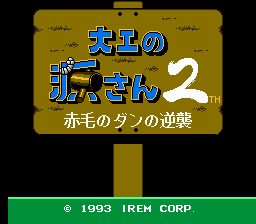 Daiku no Gen San 2 - Akage no Dan no Gyakushuu
Dendy - NES
The second part of a browser about the little man with the huge wooden hammer. This time steal the girlfriend from the hero. But sense all former - to clean to itself a way to the finish by means of the hammer. There were from the first part also improved blows the hammer both prize-winning helmets and other things. In general, a game underwent several cosmetic changes, strongly did not improve, but also became worse not on many.
GAME INFO
Game name:
Daiku no Gen San 2 - Akage no Dan no Gyakushuu
Family:
NINTENDO
Platform:
Dendy (NES)
Developer:
Irem
Genre:
Platform game
Date:
1993
Thunder Shooting