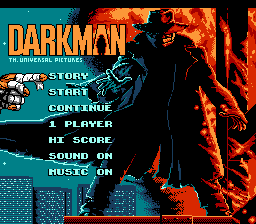 Darkman
Dendy - NES
Quite beautiful boyevichok according to the movie of the same name with a side view (from the same team of developers who did Robocop 2 so a cursor, graphics and music at games almost identical). The hero of a game is Darkmen, the hero of comics in bandage and a blue raincoat. A game begins with level at the plant, with conveyors and the other equipment. Enemies are few and are not importunate. At the level jars with blue liquid and other prizes lie. The stage needs to be passed in a definite time, but management is a little complicated. From weapon - a leg and a hand. Music in a game is simply remarkable. Quite interesting innovation is photography of the next criminal before new level: it is necessary to remove the one who is shown at the beginning of photohunting. The more pictures you will make - the you receive more time for passing of new level in which, by the way, you will be in an image of that bandit who was photographed. Also twice for a game you should do some flying on the rope fastened to the helicopter.
GAME INFO
Game name:
Darkman
Family:
NINTENDO
Platform:
Dendy (NES)
Developer:
Ocean
Genre:
Platform game
Date:
1991
Peetan