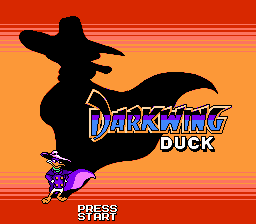 Darkwing Duck
Dendy - NES
One of magnificent browsers on this prefix. A black raincoat - the hero of the animated film of the same name found life in a game. The spirit of the animated film is kept ideally, and a game is perfectly balanced. State of emergency in an arsenal have not only an ordinary gun, but also gas grenades and suckers which it is possible to climb up walls. At each level is on two hidden bonuses where you can gather weapon, lives or health. At the end of level acquaintances according to the animated film bosses. At the beginning of each state of emergency level says the crown phrase.
GAME INFO
Game name:
Darkwing Duck
Family:
NINTENDO
Platform:
Dendy (NES)
Developer:
Capcom
Genre:
Platform game
Date:
1992
Rad Racer 2 A7800
Meikyu no Tobira - Gate of Labyrinth