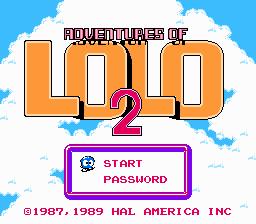 In the game "Adventures of Lolo 2" at Lolo kidnapped the girlfriend and ground at the top of a huge tower. To save the girlfriend, it should pass across all floors of a tower, solving puzzles. The Japanese version of a game appeared in America at number 2 because before the independent version of a game under the same name was released there, and the Japanese version became as if its second part though games if not to look at zastavochny rollers, are almost identical.

History proceeds! The spiteful demon kidnaps the princess again, and brave Lolo ( of Lolo ) should save her again. The plot, as well as game process, not a jot did not change. Same collecting hearts, same trunk. Levels became more various though their quantity did not change. Graphic changes are also not traced.