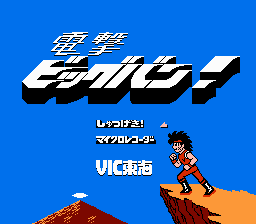 Dengeki - Big Bang!
Dendy - NES
Browser with adventure elements with a side view. The guy in red (special agent Beng) runs on levels, connected among themselves by network of routes, in search of six keys medallions from the Doomsday Bomb which is on a top of the Devil Head, the highest mountain of the game world. All routes can be seen on the card before level. The guy is able to shoot, and also has stock with a set of objects among which there are space suits, having put on which, the hero has an opportunity to pass or fly there, far earlier it could not get, for example, to pass through a lava. At a game there is a number of confidential levels which can be found, having talked in certain zones to characters.
GAME INFO
Game name:
Dengeki - Big Bang!
Family:
NINTENDO
Platform:
Dendy (NES)
Developer:
Vic Tokai
Genre:
Platform game
Date:
1989
Rayman