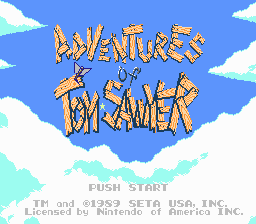 . But to make games according to books is a big rarity. Before us a game according to the well-known work of Mark Twain "The Adventures of Tom Sawyer and Gekelberri Finna". Of course, a game does not repeat all plot of the book, only the main character is taken, and some levels only indirectly remind the moments from the book. The plot is simple: Tom falls asleep at school lessons, and dreams him