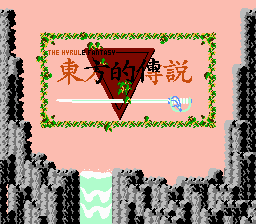 Dong Fang de Chuan Shuo - The Hyrule Fantasy
Dendy - NES
First part of the well-known series. A game is not so good what it will become on SNES, but also it is interesting to play this. The top view on the little man - the Link. Crowds of enemies (naturally). and Sea of secrets and riddles. (And not only) time differs from other RPG of games of that in lack of the fighting mode. All enemies are visible and them it is possible at desire (unwillingness to fight) to bypass. This feature will remain for Zelda on a set of continuations. As well as the first part of Castlevania, the first part of Zelda was published in Japan on cartridges only in 1992, to the same existed only in the form of a diskette for Famicom Disk System.
GAME INFO
Game name:
Dong Fang de Chuan Shuo - The Hyrule Fantasy
Family:
NINTENDO
Platform:
Dendy (NES)
Developer:
NIntendo
Genre:
Adventures
Date:
1986
NBA 07