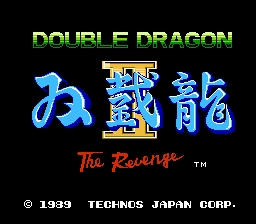 Double Dragon II - The Revenge
Dendy - NES
Certainly, one of the best (if not the best) a game of a genre kill - all on NES. The same isometric side view, but in comparison with the first part, a game became more dynamic, the arsenal of receptions extended, and now all of them are available at once, there was an opportunity to play together on passing, complexity became more balanced, and music is simply magnificent. Difference of the American version from the Japanese, consists in a little lowered complexity, but at the same time completely there are no continue.
GAME INFO
Game name:
Double Dragon II - The Revenge
Family:
NINTENDO
Platform:
Dendy (NES)
Developer:
Technos
Genre:
Fights - one against all
Date:
1989
Sonic Drift 2