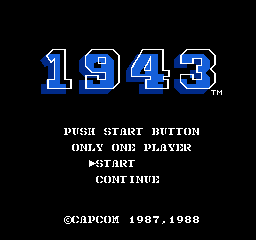 Game 1943: The Battle of Valhalla is a good example of a sequel: innovations in moderation, nothing more. Developers have made some changes to the schedule and have more variety in the gameplay. Added parameter energy, acting as the scale of life, which, like fuel, decreases over time. Also a bit of vitality you have taken away when hit, or a bullet of the enemy, as well as using special weapons. There was a possibility of leveling the attack aircraft.

Now the player will not just wade between aircraft carriers and destroyed quite a variety of enemy aircraft. During the game, attack can descend to a lower altitude and shoot the flying enemies there. It added the Japanese fleet, which can destroy the systematic shooting of guns on board.

Developers cool embellished the game, and now we can see the cute back backgrounds clouds instead of dull Islands on the background of blue sea in the first part of the game. However, now in the game, some enemy planes belonging to the peak, it became more difficult to see against the background. The game has become more dynamic by increasing the speed of the aircraft operated by a player, and enemies become more intelligent. There is another innovation - by pressing the A, we perform a super hit, which sweeps away all enemies within the game screen. Disappointing is that the developers removed the opportunity to play together.