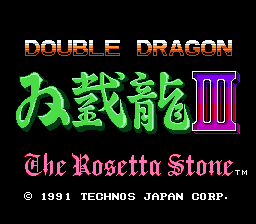 Double Dragon III - The Sacred Stones
Dendy - NES
"One of the best Beatem'up-ov on NES, and the best among Double Dragon on this prefix. There was an opportunity to play ""Chinese"" after the second level where he is a boss, and ""ninjia"" after passing of the third level where he is a boss. During the game at will it is possible to switch heroes, and at each of them not only the blows but also the weapon (it has limited margin of safety) which can be included and disconnected at will. Here, in difference from all other games from this series, interaction of players is thought over. It is possible to make a start from the partner, having jumped on him with blow, and he will throw you into opponents. Brothers Billey and Jimmy can also carry out crown reception ""the Double Dragon"" if on the first and second joysticks at the same time to press two turbo the buttons. It is possible to jump on walls, making a start from them and to force down in a jump powerful blow of a leg of the opponents. In respect of smoothness of movements this game surpasses Segovsky games of this version, and music just bewitches!"
GAME INFO
Game name:
Double Dragon III - The Sacred Stones
Family:
NINTENDO
Platform:
Dendy (NES)
Developer:
Technos
Genre:
Fights - one against all
Date:
1990
Tokio Senki