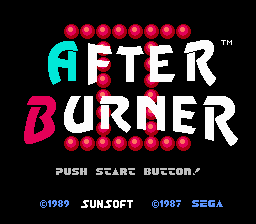 "After Burner II" – interesting game – the fighter in which you undertake control of the military fighter! At you there is a lot of tasks in a game, but the main of them: this destruction of all enemies, is also extremely desirable, to escape most! By the way, by estimates of many gamers, a game is executed very adequately and if to estimate it with coevals – that it will give odds to almost all competitors!

"After Burner II" - the successor of nice business of of Sky Destroyer . We steer plane, looking at it behind, it is far because of a tail. We shoot down enemy planes. A game was issued in two options - officially in Japan at number 2 and from the publisher of SunSoft, and informally - from the publisher of Tengen , but at number 1. Game in itself is the version for of Famicom games of 1987 from of Sega .