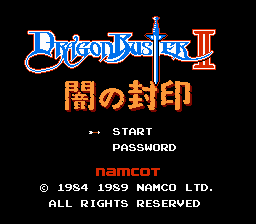 Dragon Buster II - Yami no Fuuin
Dendy - NES
Second, more beautiful part of the game Dragon Buster. The same sense - to look for evil spirits, to collect objects. The beginning also similar - the colourful card (top view) where it is possible to choose the place for hunting and to promote further according to the card to the haunts of vice. And here directly hunting changed. The look became the top view in an isometry, the labyrinth is very tangled, and the parts of a labyrinth remote from you are darkened and are lit only at approach. Your arrows jump aside a set of times from walls and can wound you.
GAME INFO
Game name:
Dragon Buster II - Yami no Fuuin
Family:
NINTENDO
Platform:
Dendy (NES)
Genre:
Adventures
Choplifter