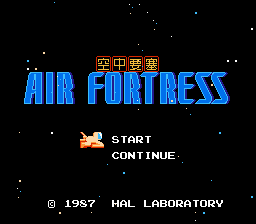 "Air Fortress" the fact that at first sight it is possible to take for a certain alien air space base is nothing else as the astronaut in a space suit on somebody similarity of the space scooter. For the rest the sense did not change - to fly under a hail of bullets (side view) and to shoot back most 'to relieve' a little the tension, also getting down from the space scooter at the end of flight, enter into space base of the opponent and pro-due to fly without scooter space on the dressed space suit, also killing opponents and overcoming difficulties on the way to the reactor that to destroy it and to activate a samouchnichtozheniye of the air spaceship. Game is quite difficult and on the is interesting.

"Air Fortress" has rather typical alien invasion.
Plot: to people of the planet of of Farmel , studied technology for space travel recently, greedy investigated a galaxy only to find herd of terrible alien air space bases to the own harm,