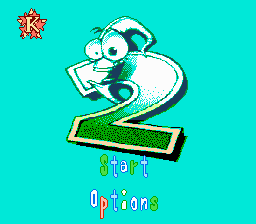 EarthWorm Jim 2
Dendy - NES
"The second part of a segovsky worm of Jim postponed for NES. On piracy cartridges it was divided into two parts numbered as 2 and 4. Objectively speaking, a game awful. But all the same with mysterious persistence attracts. Perhaps, music, though that all ""scraping"", with a manner on good melody. And can - mobility and a bezbashennost of process. Each level is some mission or feature in principle passings and that should be done, it is necessary to guess, and it is frequent difficult to make. On the course of a game the set of mistakes emerges. For example, there is no fourth stage (right after 3 there are 5). And one password is non-working. But between levels the portrait of quite real cows is shown. The main character is engaged in noble causes, saves good, shoots at bad, humours whims of those on whom depends... Amusing begalka."
GAME INFO
Game name:
EarthWorm Jim 2
Family:
NINTENDO
Platform:
Dendy (NES)
Genre:
Platform game
Top Pro Golf