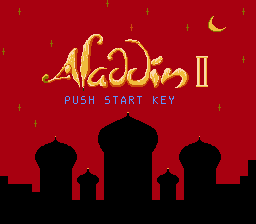 An awful piracy hand-made article on Disney's of Aladdin . A browser with a side view, with unpretentious graphics and music. Presumably late Haque of the original version from of TXC/Micro Genius .

The unsuccessful version of the well-known game about of Aladdin . Graphics and sounds in this game are so poor that to play this game desire completely disappears. 8 boring levels at choice where you will be able to collect useful objects, to battle against the enemy and at the end to win spiteful of Jafar . Obviously, developers found not enough time for a game because of what it became gray and imperceptible in the game world.