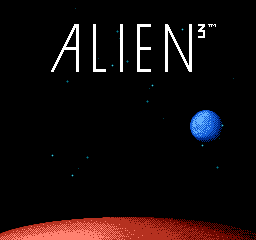 "Alien 3" - quite entertaining game by the third part of the movie trilogy "The Aliens". As Ripley you should kill the people infected with larvae of Strangers not to allow them to breed. On it you are given a certain amount of time. Having found all infected, it is necessary to leave level on a tunnel. And all this under atmospheric, fascinating music.

Before us a game on the cult & quot series; Alien" or our way - " Others ". These are those alien creatures, parasites infecting bodies of live organisms, laying in them eggs. You remember the moments from the movie when little Strangers escape from a stomach of the victim, ripping up interiors and killing the owner bearing them?

A plot in the game "Alien 3", per se, no. The main character - inimitable Ripley - needs to release all captives of Strangers and to reach an exit, having kept within at the same time time allowed for a mission. For destruction of intergalaktichesky parasites there are several types of weapon, and cartridges to them (as well as first-aid kits) are scattered on all level. If you did not meet in time, then all captives of Strangers at the level perish, at the same time the roller where from bodies of not saved people larvae escape is shown, and their bodies it is heartless